Contrary to popular belief, I didn’t just eat pizza throughout Veganuary (though could have done so quite easily). I tried out the vegan options in a few different eateries – which, as a statement, is quite impressive. No, not my ability to eat copious amounts and burn through my money, but the fact that it’s possible (and fairly easy) to eat out as a vegan, at least in Nottingham. Check out my verdicts below.

I’m no stranger to Annie’s, and have always been impressed by their USP of making every burger on their menu available as meaty, vegetarian, or vegan. Despite my numerous visits, I’d never tried the vegan version of any of the burgers. If you’re familiar with the menu then you’ll know there are some pretty outrageous flavour combos on offer, and while I’m curious as to how they execute these for the vegan customer, I wanted to judge with some context. I decided to go for a burger I’ve had before in non-vegan form: The Delta. Cheese, Mississippi burger sauce, onion rings, black olives and jalapeños.

The patty is the same as used for the vegetarian versions: ‘meaty’ rather than vegetable-based, with a heavy paprika influence. The cheese, along with the sauces, was creamy and delicious – totally fooled me. Enjoyed it just as much as I have the other versions, if not more.

If you were to ask me to name a chain restaurant with a vegan menu, Yo Sushi certainly wouldn’t be the first to spring to mind! But during January, and in recognition of Veganuary, the chain had a special menu – not only offering around 15 vegan options, but all of them sold at the cheapest price point. Win win.

The Pumpkin Katsu Curry was a everything I’d ever dreamed of, crispy on the outside with a gorgeously sweet and gooey centre, coated in the familiar sauce (although with way too much rice). Green vegetable gyozas were also good, but a dish of aubergine was really vinegary and overpowering. A tad hit and miss for my trip, but really promising to know there’s some choice available in a different type of cuisine.

I’ve reviewed The Peacock before, but with it being the only restaurant in Nottingham offering a fully vegan menu, it means I’ve got plenty of options to work my way through without being exhaustive. This time I tried ‘the burger’, which was pretty vague in its description other than to mention it involved mushrooms.

It’s a pretty ‘no-frills’ affair, and felt a bit like something I could have bought from Tesco, banged in the oven and assembled on a cob myself. There was the option to add cheese on the top and I’m glad I did, otherwise it would have been a little bit dull. Big fan of The Peacock, but next time I’ll go for something different. Tasty enough, but nothing special.

When I learned we were going to a Carluccio’s for a colleague’s leaving lunch I was dubious as to how vegan-friendly the menu would be, but to my surprise there were at least three vegan options available. I went for the Spaghetti con Polpette di Pane, which consisted of pasta with ‘meatballs’.

It was these balls that really made the dish unusual and enjoyable; described as ‘Puglia-inspired balls of bread’, they were made up of capers, olives, garlic and semi-dried tomatoes, with some kind of breadiness to give them a meaty texture. Full of flavour and incredibly tasty, these were the star of the show, because sadly the tomato sauce they were coated in was fairly bland and nondescript. On the plus side, it was really generous portion size which always scores points with me.

I have a lot of love for these guys. Over the last few years, they have transformed what was the epitome of an ‘old man pub’ into a modern and diverse eatery – while still delivering as a good old pub. Similarly to Annie’s, their food menu offers everything as a vegetarian AND vegan option. But while Annie’s is all about the burgers, The Angel gives you all the Brit classics – fish & chips, pies, sausages & mash.

Despite all of this, I opted for yet another burger (in my defence I’ve tried most of the menu but this). And my god, what a burger it was. Mushroom-based, it was full of herbs and seasoning which helped set it apart from the norm. No cheese on this one, but there was the chance to add fake bacon on top, which I obviously did (crispy, not rubbery as I’ve come to expect of veggie bacon). And to top it off, some wonderful pesto, coleslaw and salsa to give every bit of the meal an extra kick. I’d say it’s the best veggie burger I’ve had in Nottingham (special mention goes to the pretty damn good chips, too). 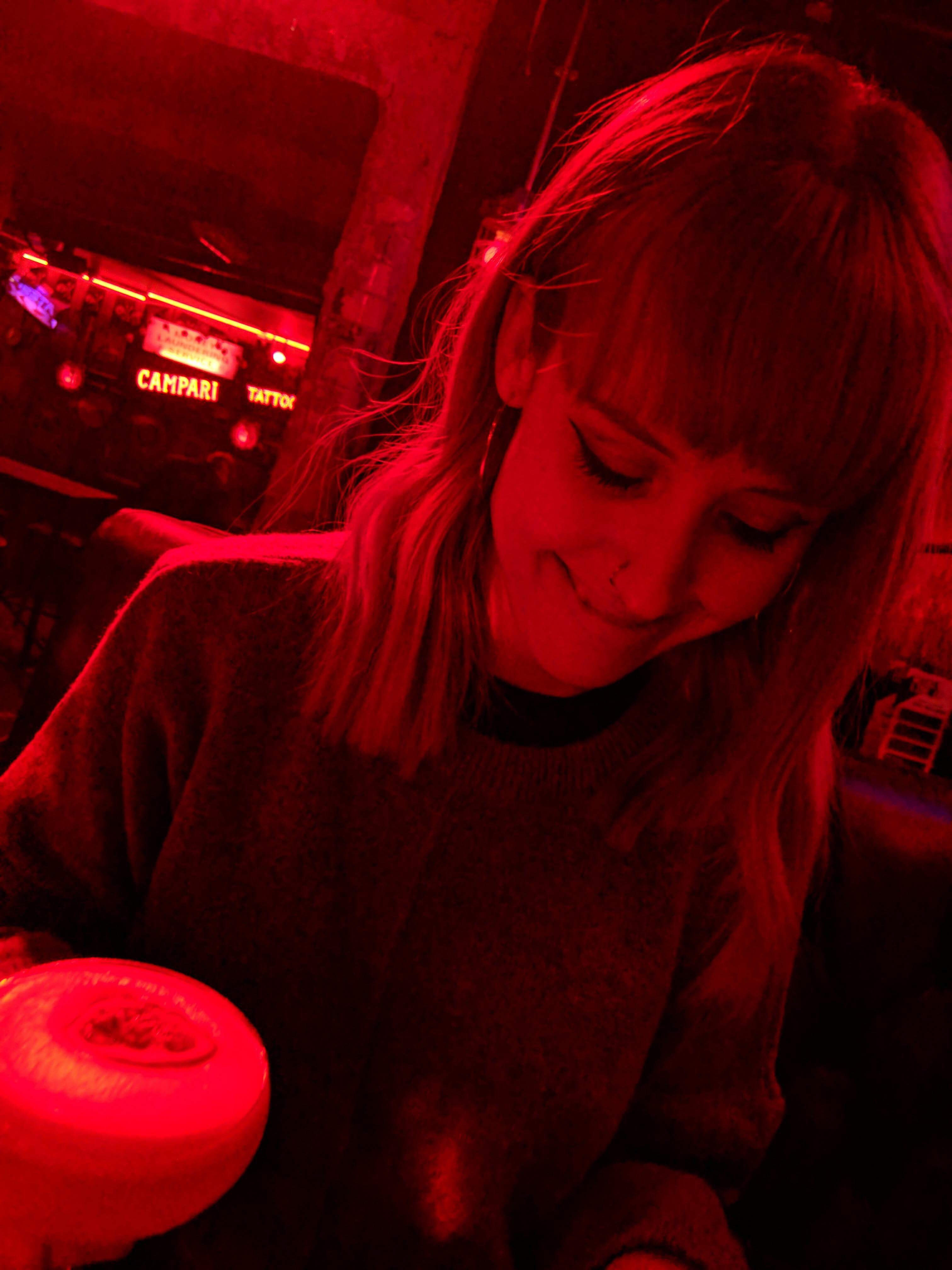