I first learned of Oscar & Rosie’s pizza through their residence at Das Kino and had been keen to try them properly since they branched out on their own. These guys are all about the ingredients – high quality and quality taste.

They’re currently a bit tucked away on Thurland St. (though I hear they’re soon moving to bigger and better premises in Hockley). It’s an urban vibe inside, a mix of long communal benches and individual tables with graffiti-scribbled walls (and one particular wall plastered with old Private Eye covers). 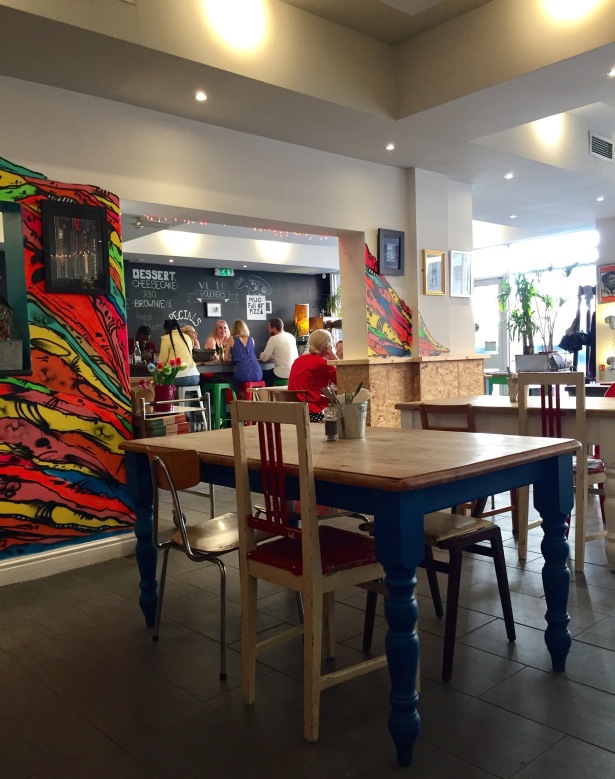 The menu is mouthwateringly good. I’m a firm believer that if you’re going to go out for pizza, rather than order in, then you want something that’s a bit out of the ordinary. You want interesting combos and decadent flavours, and that’s what you get here – it toes the line between experimental and firm favourites. Another selling point is that they do an extensive menu of vegan pizzas, with not a mundane marinara in sight. It’s every bit as exciting as the standard menu, just with vegan cheese and all manner of veggie meats thrown on instead.

It’s necessary to say that these pizzas go big or home – quite literally, because they only do the one size (except for the Margheritas). And at 14 inches a pop, it’s no mean feat getting one to yourself.

But it’s (supposedly) not all about the size, so how did they fare in the taste test? I tried out four flavours…

First up was the Barcelona Sausage Party, aka chorizo central! It’s probably my favourite meat anyway so the chances I’d dislike this were slim from the get-go, but it still excelled. The chorizo slices were slim, crispy and evenly spread – meaning ultimate flavour with every bite.

Next was the Grown Up’s Special.

Keeping it simple with anchovies and olives, this was sharp and salty without having you reaching for your drink every couple of minutes, and the juice from the cherry tomatoes really helped to balance out the flavours. It’s not a pizza I’d normally order, but maybe I’m ‘grown up’ enough now because this was spot on.

Next up was one off the vegan menu: the Cheat Sweats.

Topped with vegan chicken, bacon and ham, it packed in a good deal of flavour to rival its meaty counterpart (ft. a little less salt, which is only a good thing really). Unfortunately the vegan cheese let this down for me – it doesn’t quite melt the same as dairy and I missed the gooeyness!

All pizza’d out? Hang in there for one more – The Cosmopolitan.

I was hesitant to order this, because it came with a pretty out-there ingredient – PEACHES. I’m not a fan of mixing fruit and savoury (pineapple on pizza is the devil’s work and you can get out with your raisins in a salad) but I guess I was feeling wild with this one, and I’m so glad because this was incredible. The sticky sweet peaches were a match made in heaven with the salty Serrano ham, to the extent that I think this was my favourite out of the bunch.

One of our group made a really good point re. the eating experience here. Because it’s pretty much a one-size-fits-all approach, it almost encourages a culture of sharing, of ordering a few things and just dipping in collectively. It’s sociable and it’s fun, which is absolutely the atmosphere that this place thrives off.

Dare I say it? Best pizza in Notts.